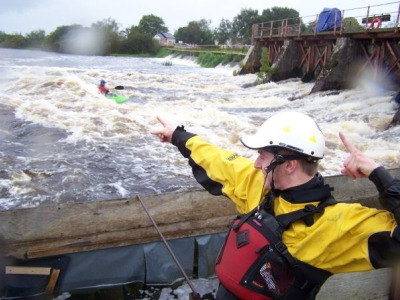 A fast, steep wave, the wave is below a set of sluice gates on the extreme river left that allow the flow through and keep the water levels for the river Shannon above the weir.

Tarmonbarry on the border of Roscommon and Lonford. From Longford Town head out the Westport road. When reaching the Shannon you have to cross a bridge to get into Tarmonbarry. Cross this and take the first left follow the narrow road to the bottom of the lock gates and park up.

There is a large car park at bottom of new housing estate, just follow around and past the lock gate house. Watch out for the deep sunken pool between the white walls in the park (no other barriers or warnings), when the river floods look like a large shallow puddle but will swallow your car!

Get in below the weir at the lock gates and slipway and paddle over takes 1 minute to get there.

Have not heard of any problems with the get on/get off. However when at the weir one should be aware that the relations with the lockkeeper must be kept good. This is helped by staying off the boardwalk above the weir gates. If setting up a camera, do so quickly and move off platform again.

The wave is created by the flow of water over a concrete slide, which is very shallow however under the wave itself is not that shallow at all and it gets very deep behind that again, as represented by the unpredictable nature of the water (boils and whirlpools)..

There are big eddies on both sides, river left recirculates.

Directly behind the wave is quite boily and the odd whirl pool pops up here and there...it makes for an interesting paddle back to the eddy.

For clarity the gates number 1-12 from surfers left to surfers right (river right to left!)

1-11 Open/Level-continuous flow over the weir: nice wave. good left and right shoulder. steep and greenish in the centre with the foam pile left of centre. easier to paddle on than 11 gates and less whirlies. Nice wave train going back as far as the island. Video.

1-11 open/Extremely high water: Very wide and very retentive wave forms.It has 3 different sections.River left section is most retentive and has a powerful shoulder.centre section is retentive but friendlier than river left.Centre also has two nice shoulders.River right has a nice shoulder on surfers right but is flushy. Video.

The shallowness of where the sluice gates are.

There is a wall which runs between the mainland and the island downstream of the wave.In high water this wall is submerged and is only a danger if you are capsized.It is responsible for the river left eddie recirculating.

Watch out for fishermen and riverboats.

Some metal girder type things wall the river left eddy and one is submerged but is well out of the flow and once you tap it once in your boat you'll know where it is.

Note: the above mentioned girders are at top of eddy when 1-11 were open and left large deep gouges in boats that hit them when trying to get high enough to carve across.