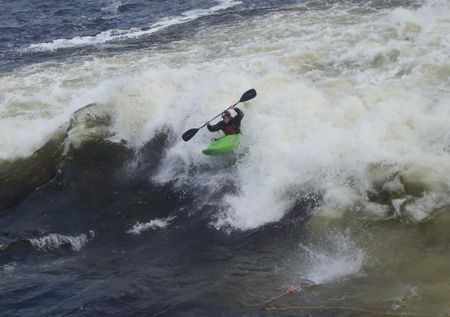 The Lower Corrib is anything below the Salmon Weir in Galway city and generally is paddled from below the river wide fish gates with access by the shit chute (see below). It is practically always runnable but generally higher flows make it more fun although it is very short, only about 400m with no major obstacles besides the pillars of the two bridges. With big wave trains downriver freestyle can be a lot of fun, macho moves and kickflips are the name of the game.

The put in for the Lower Corrib, Upper Corrib and the Galway canal system is at Fisheries Field. When coming from anywhere (bar the west) into Galway, follow the signs for Clifden. Once you cross a dual carrigeway bridge over the river Corrib you must take the next left turn at a Topaz station. Follow this road until you get to a major junction (2nd set of traffic lights), take a left turn at the junction and continue until you see a big ass church (the cathedral) in front of you. At this point there should be two small roads on your left, take the second one, this leads to fisheries field. If you find yourself passing the cathedral and then crossing another bridge , you've gone too far. Video showing access to the Corrib here

Access to all features besides the Salmon Weir is ascertained by travelling down the shit chute. The Shit Chute flows almost beside the NUIG kayak club shed and joins the Corrib just below the river wide gangway of fish gates. It didn’t get its name for nothing. DO NOT CAPSIZE HERE, IT IS NASTY.

In low water, the Shit Chute drops into the river via a small rapid, and in high water is level with the river.

Also before you head out, check the tides. Some very high tides make passing the last bridge (Wolfe Tone) impossible whilst upright in a kayak.

Below Wolfe Tone bridge there are get out points on river right (Claddagh) and left (Spanish Arch) . Throw the boat on the shoulder and start walkin up through town like a champ. Look for the Cathedral and walk towards that.

A large Horseshoe shaped series of weir gates (16 in total) with the ability to release a huge volume of water down the short artificial Lower Corrib. On certain gate configurations different features form. However this can be a pretty rare occurrence.

14 Gate Wave: A medium sized wave with eddy access, requires a paddler to surf across a large form pile in order to get to the green steep part. Has been surfed very rarely, one of the reasons for this may be the extremely retentive fast hole with forms right behind the green part of the wave. Gives a good kicking everytime. Video:

5/6 Gate Wave: What can only be called a massive wave forms at this configuration. It is a ridiculously steep and fast wave. It can be unpredictable and leads to many the hilarious wipeouts. Some big tricks have been thrown on this feature but generally people who paddle it are of the opinion that you need to be a world class wave boater to truly take advantage of this monster. You need to tow on to surf this wave, no easy feat, paddlers often feel whiplash and heavy strain on their body after a session here.

Warning: Directly downstream about 100 metres there are nasty nets and steel frameworks through two (of three) river right arches of the Salmon Weir Bridge. Downstream again there is a river wide strainer gangway with no clear path through whether swimming or in a kayak. Kayaking here is a very dangerous exploit. As well as that fishermen who pay for licences will often report trespassing to prevent you entering this part of the Lower Corrib. All in all it is advised to not surf this feature unless you have a large skill level and are with a paddler who knows the feature well.

The first eddy on river right to break into on the way downriver after coming out of the shit chute, just above O'Briens Bridge. On high water the Hygia wave start to work (best between 12 and 14 gates on the Salmon Weir, flow dependent, at its best on a mid to low tide) this wave is a fast surging green wave, where you must use a long oldschool playboat to stay on (prozone, forplay, slice etc) Spins and blunts are possible. it is a tricky wave, it take some time to get uset to. When you get washed off the back of the wave you must paddle really hard to catch the eddy. There is a tree overhanging the water which marks the end of the eddy. Be careful not to get stuck in the tree.

Located just below Hygeia wave just after the river right arch of O'Briens bridge. Needs very high flows to work preferrably 16 gates on the upstream Salmon Weir to be open. It also works best when the tide is in. This is a wave purely suited to old skool long boats. Super sports and Jives go great, a prozone being the shortest to surf it (not very well). again its a surging green wave. From the river right eddy you must time your entry onto the wave as you must surf a feeder wave which leads onto the main wave, when the main wave surges towards you. Once you have surfed on, a long ride ensues, with paddle spins and shudder rudders the name of the game. Spins are possible, with blunts being very rare. Once flushed off the back of the wave, you must hurry into the river right eddy behind the bridge or you will be washed downstream. Video:

Below the take out, further on towards the sea the rapids will form. This needs a very low tide and preferably a minus tide. In addition you will need at least 10 gates open at the Salmon Weir for the rapids to be working properly. There is a top hole and a couple of playwaves here. It makes for a really high volume rapid although it is shallow in places. The higher the flow the better the top hole which is situated river right at the top of the rapid. All hole moves possible here and it is quite retentive, however certain spots in the hole can be shallow. The hole does not have eddy access.

The main play wave is located at the end of the rapids right in the centre. It has great eddy access and on certain levels gets very steep with a beautiful right shoulder and pile. A real shame that this gem does not come in more often.

Best time to be for a session at the rapids is an hour before until an hour after the point of low tide.